Brian May Back to all interpretations 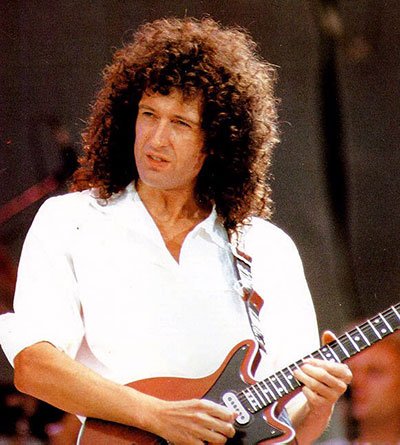 Queen guitarist Brian Harold May was born on 19 July, 1947, in Hampton, England, to the parents Harold and Ruth May. He has had a good relationship with music since his childhood. As a kid, he liked to sing, devoted himself to playing the piano, and from the age of six learned to play the ukulele; at the same time, he started longing for a guitar. He got his first guitar, a so-called Spanish one, on his birthday, but since it was too large for him back then, he started to tweak it: adjusted the neck, made an improvised pickup—and at once had himself an acoustic guitar.

In his spare time he, besides engaging in his passion for astrophysics, listened to records while playing the guitar. Gradually, he moved from chords to individual tones—he was interested in playing the guitar in the most thorough detail. He passed exams of theory and practice on the piano but quit further studies. Then he began to write melodies and playing at family parties. On the seventh birthday, Brian received the first acoustic guitar, which he started to get acquainted with, and later began to make various adjustments to it. In particular, he added custom-made pickups to achieve electrical sound. This guitar was enough for him until the teen age, but then he starting longing for a real electric guitar. He did not have the money to buy a new electric guitar though, so Brian with his father Harold decided to make the exact guitar they wanted by themselves together. The result of their eighteen-month work was the guitar later known as the Red Special, Fireplace and Old Lady, which is another proof of Brian's remarkable talent as a musician. Since then, he has used the Red Special for the whole time of his musical performing.

Brian got his first experience with playing in a band at the age of seventeen, when he and his classmate Dave Dilloway founded a band, in which Tim Staffell became a vocalist and a mouth harp player. They named the band 1984 (in reference to the famous science fiction book). They played in public halls and schools. One of the memorable performances with the 1984 was their concert on May 13, 1967, when they accompanied Jimi Hendrix, who later became a legend. Brian, together with Tim Staffell, arranged a competition for the drummer's place in the band, thanks to which they met a medicine student named Roger Taylor.

The next band in which Brian was involved, Smile (1967–1969), was a project launched by him together with Tim Staffell, who was a singer, and Roger Taylor, who accompanied them on drums. However, then they broke up due to music style disagreements, and Tim got replaced by his roommate from the college, a singer from Zanzibar Farrokh Bulsar, later known as Freddie Mercury. Soon, John Deacon joined as the bassist, and this was the birth of Queen. On July 2, 1971, Queen played the first concert in their most famous ensemble, and in July 1973 they released their debut album called Queen, which gained great success.

The previously mentioned Red Special guitar was used by Brian even at the times of Queen's greatest glory. Its name, Red Special, referred to its red color. The nickname Fireplace is a very witty one, as the neck of the guitar was hand-cut by a pocket knife from a pillar of an old-type fireplace, which their family friend was happy to get rid of. At the saddle, the neck is 46 mm wide, the space between the extreme strings is 40 mm (standard models back then had 41–43 mm / 34 mm). The neck is 29 mm thick on the first fret, gradually increasing to 31 mm on the twelfth fret, which obscures even the baseball bat necks of Jeff Beck's strato­casters.

The glossy fingerboard is of oak painted black with the material used by the British handymen known as Rustin's Plastic Coating. The position markers were made of handcrafted pearl buttons that they found in their mother's sewing box. The neck has 24 frets, 24" scale length, and 7.25" radius; the strings are 009"-042". The middle section was made of an old oak table, then two layers of furniture board were added, and the surface consists of a mahogany veneer stained with brick-red dye and varnished with Rustin's. Originally, there were also supposed to be F-shaped cutouts, but Brian eventually did not put this idea into practice. The guitar is like a „lubovka“ and resonates at certain frequencies. It also has a decorative border made from the edge of some shelf.

During the long years of playing, Brian tried many different guitar picks in pursuit of the perfect guitar sound. However, it was after all a six-penny which proved itself as the best pick for him, providing a distinctive metallic sound. The coin had serrated edges, with which he sometimes produced a scratchy sound, otherwise he held it very lightly. His favourite amplifier, which he uses during a performance for 9 tracks in a row, is the legendary Vox AC30 combo.

May is the author of many classic Queen songs, such as Now I'm Here, Tie Your Mother Down, We Will Rock You, Save Me, Who Wants To Live Forever, or The Show Must Go On. The sound of his guitar is as essential and characteristic of Queen music as the voice of Freddie Mercury.

Brian is known for loving solos and trying to put them into each song. He undeniably represents the highest class in the guitar playing world, which is also confirmed by his top positions in music magazine rankings.

Besides his numerous musical achievements, Brian is also a writer and astrophysicist. He graduated from London University's Im­perial College. After Freddie Mercury's death, he performed with the re-established Queen and the singer Paul Rodgers under the label Queen + Paul Rodgers. In 2009, Brian May and Roger Taylor met Adam Lambert in the American Idol competition and started to perform together as the Q + AL group as of 2011. They have had several successful global tours and are planning more.

As a member of the band which aims for the most accurate interpretation of the work of Queen, I decided to thoroughly follow Brian May's sound schemes. Getting any close to Brian May's sound is not easy though. It went through many years of development, but still throughout his entire musical career Brian stuck with his five distinctive sound features—the typical Red Special guitar, 3× VOX AC30 combo, Treble Booster + chorus, Tri-Delay and a few types of harmonizers.

I create the specific sound by connecting the VOX AC30 combos according to Brian May's original schemes. To achieve the most accurate result, I use the original Brian May's boosters from Fryer brand before amplifying in the combo boxes. For the typical tingling sound I use a gentle stereo chorus and a coin instead of a pick. In Queen's studio song versions, Brian also used guitar layouts.

This effect created different, denser harmonies. I also follow this pattern, and for live performances I use several specific harmonizers.

I often get asked what it is like to play Brian May's music. Especially his riffs and solos. My answer always is that it's completely different from the music of most other guitar players. Brian is practically a self-taught guitarist. His specific conception of playing corresponds to it—the imaginativeness, originality and technical maturity thereof largely contribute to the typical Queen sound. That's why every new song is a challenge and a journey at the same time for me. Thus Queen's songs are a great treasure chest for me, every next song enriches me with something. It is beautiful rock music, which I am delighted to play.