Freddie Mercury Back to all interpretations 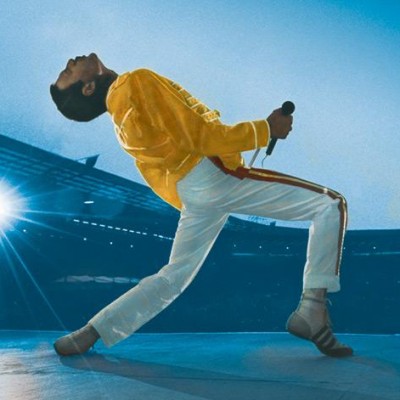 Freddie Mercury was born as Farrokh Bulsar on September 5, 1946, in Stone Town in Zanzibar. At the age of less than nine, in 1955, he left his native Zanzibar, when he was sent to St. Peter's boarding school in Panchgani (Mumbai), where he received classical English education as well as his first musical background in the form of piano lessons. It was there that the transformation of his name from „Farrokh“ to „Freddie“ took place, as his classmates and teachers began to call him so for practical reasons. The name also stuck among friends and family members, so the famous singer accepted it as his own. While at St. Peter's, he also founded his first group, The Hectics, in which he played the piano. However, not much is known about Mercury's musical education. Reportedly, his musical talents enchanted several professors at the boarding school, so they made a point of supporting them. It is likely that he got a certain vocal education as well, although it is also said that Freddie had never studied singing—but we'll focus on this later on. In 1963, he left the boarding school and returned to Zanzibar, where he completed the last two years of studies at St. Joseph's Roman Catholic school. Freddie's father, Bomi, worked in Zanzibar in the British Colonial Administration as a judicial clerk. Thanks to that Freddie got a relatively good background, and maybe also for this reason the family left for Great Britain after the Zanzibar Revolution in 1964. However, little is known about this event's circum­stances as well, and there are several different versions of the story. In any case, the family ended up living in the London suburb of Feltham, and in 1966 Freddie began to study at London's Ealing College of Art, which further shaped his artistic life and where he met Tim Staffell. Tim and Freddie became inseparable friends and engaged in making different kinds of music together. Freddie never neglected music. During this period, he got involved in the bands Wreckage and IBEX, and during the same time Tim Staffell, back then a member of The Smile band, introduced him to Brian May and Roger Taylor. In Freddie's opinion, The Smile did not use their full potential, and so Freddie proposed that he could become the frontman. Tim did not like it though, so he left The Smile. And that's how a new group formed, the one that would later be called QUEEN!

Freddie Mercury = Queen, and Queen = Freddie Mercury—at least this is how the frontman of the legendary British band is perceived by the general public. And it's not a coincidence. Freddie Mercury was undoubtedly the most extravagant, the most versatile and the most gifted band member. Although his main domain was singing, one may not leave unmentioned also his tremendous composing talent, ability to play the piano, movement skill, sense of detail, as well as his overall desire to always go further and be one step ahead of the others. It was him who proposed the band's name and logo, and it was also him who always had something to say in any matter. Freddie Mercury together with Brian May determined Queen's main course—not only through the vocals and Red Special, but also by defining the melodic procedures, vocal layering, etc. He was a gifted composer—notice some Mozart elements e.g. in the Love Of My Life; his Bohemian Rhapsody became the most successful song of the millennium. Although he played the piano often, Freddie Mercury was not a particularly superior pianist. Still, he was able to captivate the audience with his extremely accurate playing style. Roger Taylor claimed that he was more precise than a metronome. One can suppose that if he had devoted himself to the piano, he could have become a great pianist too. For instance, his wrist was very relaxed when he was playing, which one can notice listening to the introductory tunes of the Seven Seas of Rhye.

Is it possible to break down Mercury's singing technique at all? In part it is, but this would require certain context. First of all, I would like to bring up the very discussed topic of whether Freddie was a tenor or a baritone. At first glance, all this is a very relative thing, since individual voice types are graduated according to the ranges. How to measure it for a singer who is so vocally endowed, able to cover the normal baritone range as well exceed into the tenor range, though? I am inclined towards the opinion that Freddie was a baritone with tenor overlap. That is, his voice when speaking normally does not even remotely resemble Karel Gott's well-known high-pitched voice, which is so typical for the tenors. And although Freddie was not a big man for sure—especially not in the 1970s—his voice was very strong, supported by many factors. The wide-open mouth, stuck out chest, body cavities, and, of course, his jaws were what gave his vocal that amazing strength, extent and timbre. The teeth, for instance, played an important role in the color of Mercury's voice. The teeth, after the cavities, are the last resonator in the head and face that affects it. Freddie had a total of 36 teeth, which is 4 more than what is normal for an adult. In one part of the oral cavity, he even had two rows if them, which was also the cause of his noticeable overbite. No wonder he refused any surgery—he feared for his voice just like Barbara Streisand for her nose.  So even though some might claim that a singer's instrument are the vocal cords, it is actually the whole body. It must always function well. Any inflammation or swelling of the cavities directly affects the overall result. It is similar to how a guitar works, where the pitch is determined by how the string is tuned (in case of the voice, these strings are the vocal cords), the sound color depends on the body of the guitar + the material from which it is made (body cavities + constitution of the human body). All in all, I do not want to go into much detail here, but to understand Freddie's style, one should realize this. The masterful technique and the ability to work with the tone were essential for his bel canto singing (in other words, with minimum effort for the maximum effect—or the exposed singing, not the exposed roaring) and huge vocal extent. Based on the studio recordings, his chest/head range can be measured from „big F“ to „F2“, and when using falsetto he gets as far as to „D3“. Technically speaking, his range covered almost 4 octaves, and we don't know for sure whether perhaps there would not still be reserves for more. When necessary, Mercury modulated his voice to such an extent that it went from the velvety, delicate bel canto color into the „chainsaw“ mode. Another excellent technique in his case was the smooth transition between individual vocal registers (chest tone, head tone, falsetto). This really added a special kind of magic. It is worth pointing out that some singers cannot master this technology during their whole lives, while others need to keep learning it for years. Mercury was able to move from one register to another, even in the most exposed moments, just like that. Some say that Freddie never studied singing, but I personally do not support this point of view. I believe he must have had at least some basics of classical singing. I'm not talking about taking classes with a mentor systematically. He could have learned something during his studies in India (as I have hinted in the introduction) and later just pick up something here and there occasionally. On the other hand, he had a huge talent, so everything is possible. His way of singing and leading the tone in any case bordered almost with the opera technique, and so the fact that he flirted with this area is not surprising. This, of course, does not mean that he could sing the opera just like that—it is a different way of singing—but he definitely had a very good foundation and disposition for it.

And how do I perceive the frontman's role in our Queen tribute band? As far as I'm concerned, being in Freddie's position is nothing easy. It is not just about the expression and the color of the voice. All this is naturally also about meeting the huge expectations I get from the audience. Moreover, Freddie's singing in studio songs was different from live performances. In the studio you obviously have an endless number of attempts to sing a high key, you have your time and you can come in well rested, while on a tour performing live in front of people the singer always has only one attempt. Therefore, Freddie often sang the songs at concerts differently than in the studio. He even transposed some songs lower (for example, Queen played Who Wants To Live Forever live one tonality below the studio recording—we also have this song transposed like that); other times Roger Taylor took over the main vocal line instead, so that Roger was amplified and Freddie put in the background. But this is not surprising. In Queen's case, the songs are highly exposed from the singer's perspec­tive and they require really high concentration to stay in the optimal shape (especially during a tour). It is understandable, however, that the audience wants to hear the songs just as they know them from the radio. This is a credo not only for me, but also for our whole band. Since we play and sing all the songs in the same keys as Queen did, I make a point of following strict voice hygiene before our performances—avoid smoking, drinking or staying in a smoky environment, sleep a lot, inhale Vincentka (highly mineralized natural mineral water with beneficial effects on mucous membranes of the respiratory tract). Of course, it is also necessary to continuously work on the technique and I also orient mine towards bel canto. Fortunately, my voice range (chest/head register from „big G“ to „E2“ + falsetto to „D3“) and disposition allow me to sing the songs in their original keys and technically approximate Freddie. It is therefore always a huge challenge for me to face the audience and meet their expectations. Freddie, however, was a showman, and on the podium, he really went wild. I always seek a compromise between parodying (which, in my opinion, nobody really wants) and complete movement passivity (which is also not interesting for anyone). On live performances, in the Crazy Little Thing Called Love Freddie played the guitar—from the beginning a twelve-string acoustic guitar, later a white Fender Telecaster, which, by the way, got stolen after the Magic Tour in 1986. If the technical conditions allow so, I also play a white Fender Telecaster and in some other songs accompany the band on the piano.

Freddie Mercury was undoubtedly one of the greatest personalities of the modern art, and it is a tremendous honor for me to sing and play the songs which he and Queen composed. Getting to know them was one of the last factors that all together influenced my relationship to music and subsequently my whole future life. I do my best trying to transfer the energy that I feel when singing to the audience, and if this happens, the harmony is perfect. Although I do not want to grow old as a singer in a tribute band, I firmly believe that we will be able to shift this genre further, beyond the limits of its conventional perception by the audience. This has always been our goal, although the journey is long and challenging.