John Deacon Back to all interpretations 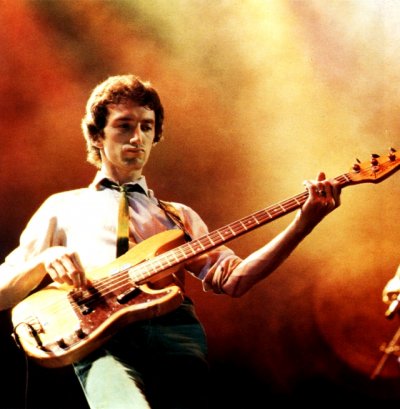 John Richard Deacon, the bassist of Queen, was born on August 19, 1951, in Leicester, UK. He has dedicated himself to music, specifically to playing the guitar, since his childhood. He gained his first experience playing in a band at the age of fourteen when he founded the music group The Opposition. Initially he played the accompaniment guitar in it, but soon moved on to the bass guitar. When he was less than twenty, John met Roger Taylor and Brian May, who were right looking for a bass player for Queen. They got thrilled about the way John played, so they soon accepted him to the band. On July 2, 1971, Queen played their first concert in the most famous group of members. It is worth mentioning that J. D. at that time (June 1972) also managed to graduate cum laude in electronics at the University of Chelsea.

John Deacon was definitely the quietest and calmest of all Queen members—we can even say, the least noticeable one. This, however, certainly does not diminish his musical contribution, which is as significant as those of the rest of his bandmates. In addition to the hits he composed (I Want to Break Free, Another One Bites the Dust, You're My Best Friend…), he, together with the drummer Roger Taylor, expressed his remarkable value in the overall rhythm of many songs. The solid rhythm, which Brian May and Freddie Mercury could rely on, was certainly one of the important aspects of the popularity of this phenomenal band—really, who of you do not start, at least quietly, tapping the feet along the rhythm when hearing the blasting motif of e.g. the aforementioned Another One Bites the Dust?

Paying closer attention to John's style of playing, one will certainly notice how precise it is. His bass lines are fascinatingly sophisticated and colorful, often very melodic, played with amazing rhythmic precision and feel for the composition. This reflects John's exceptional musicality, playing technique and masterful art of „making the tune“. For John Deacon, the most common technique until some 1980s was playing with fingers, although the guitar pick had already started appearing in his hands as well. Throughout the 1980s, John began to use the pick more frequently, and one of his characteristic signs is the presence of picks slipped behind the pickguard of his Fender Precision (sometimes also the Music Man StingRay) bass guitar. One can normally hear the bass guitar as an accompanying instrument in Queen songs, but often it also is the main one (remember, for example, apart from the previously mentioned, also the compositions A Kind of Magic, Dragon Attack, Back Chat, Under Pressure intro theme…). In some songs, we hear the deep bass, often repeating one musical motif; in others, it has, on the contrary, a very distinct sound (like that of a solo guitar) – such songs are often full of various quick passages (Killer Queen, The Millionaire Waltz), which often include it playing very high keys (Save Me, Too Much Love Will Kill You, Teo Torriate and many more). Like the remaining Queen members, John also played other instruments from time to time—in his case it was the guitar, accompanying synths (keys) and double bass. However, unlike his colleagues, he never sang the main vocal line (at the concerts his microphone usually was off). In his words, he was not gifted with the pretty voice tone needed for that, even thought he would have loved to.

In the beginning, between 1971 and 1972, John used a Rickenbacker 4001 bass guitar, but had trouble recording with it. Because of that, he switched from this instrument to a Fender Jazz Bass for a very short time and then in 1972 went for a Fender Precision, which became his main and personally typical instrument practically for the rest of his career (that year he was given a 1965 model by the record company and second Precision 1968 model he bought in 1974). Over time, he modified these two pieces in different ways, especially visually. Over the years, in some of the tracks he also used a Music Man StingRay, Kramer DMZ 4001, Fender Precision Bass Elite, Fender Telecaster Bass, fretless Fender Precision, Warwick Buzzard, Wal Pro Bass. According to the information available, J.D. used Rotosound RS77 LD 045 Bass flatwound strings and Superwound 606 roundwound strings. Not much is known about the bass equipment, but it is obvious that John had it sorted with great complexity (for instance, it was set up by the acclaimed Pete Cornish). He changed the equipment frequently and also combined different brands of individual components, the known ones being Orange AD200B, SWR SM-900, SWR Goliath, Sunn 412L, Acoustic 371, Acoustic 301, Alembic F2B, as well as products from the Sound City, Peavey, HiWatt and custom-made devices by Pete Cornish. On stage, John Deacon acted naturally, did not make a big show of his part, mostly stood slightly aside and played somewhat for himself. This was an expression of his introverted personality. However, he has some special movements of his own creation—for instance, when he spun around and ran across the podium in various ways. John ended his musical career in 1997 when he retired and since then never got involved in the subsequent Queen reunions with Paul Rodgers and later with Adam Lambert. However, to this day Queen fans all over the world recall him and feel a bit upset that he will most likely never join Brian May and Roger Taylor on stage again.

Interpretation of John Deacon's music is not easy, considering its wide range. It requires certain musical skill and wisdom, solid playing technique and reliable mutual understanding with the drummer. Bass lines are usually very varied, include frequent changes, and therefore require also a good memory to play all the nuances. Also John's sound plays an important role for the high-quality interpretation—I aim to attain this with the Fender Precision Bass from 1977, which is made of the same wood as John's (natural alder body, maple neck, rosewood fingerboard) and fitted with the vintage Seymour Duncan Antiquity II pickups, which are an exact replica of the original pickups produced in the 1960s. I use the Rotosound PSD99 strings which are an analogue of the Superwound 606 ones—those are no longer produced nowadays. To reach the greatest consistency of the overall result, I use the Kemper Profiling Amplifier, which is currently the most advanced digital device for reproduction of real devices and effects. Thanks to this utterly authentic simulation I can use different John's devices from each period and switch between them during concerts according to the needs of each given song. For the sake of maximum accuracy, I have also altered these sounds in the music studio comparing them to John's original recordings of his bass. For my core sound, I use the Alembic F2B simulation in combination with the Sunn 412L box and the Acoustic 371/301 set. I play the tracks as closely to the original as possible, following both the tones and the expression, as well as in terms of the playing technique. I usually try to stick to the original versions, but I also like to use the different variations that appeared during live performances.

And how do I learn the songs of Queen? For the most part, I listen and analyze the bass line by myself. Queenie often take elements from concert versions of songs that do not have official music notes (I can not believe the tabs on the Internet and I do not like playing by them anyway). The advantage is that when I listen to a song and learn how to play it by myself, I will remember it right away. Nonetheless, if the bass notes for the song in that version do exist, I usually do it by playing by them along with the recording and only checking the differences. This method is definitely faster than analyzing the entire song by listening alone, but on the other hand, the song is harder to memorize. My approach is that where it is played with fingers, I play with fingers, and where it is played using the pick, I use the pick as well. This is usually best seen from videos, but often can be noticed by the ear alone too.

Finally, I would like to say that when you do a complex listening analysis of Queen recordings, it becomes undeniable that John Deacon is very stylistically distinctive and his sound is easy to recognize. John's charac­teristic melodic approach to making bass lines distinguishes him from many other bass guitar players and creates a very typical footprint in his recordings. This makes him a very influential and internationally acclaimed musical personality not only among bass guitarists.