Roger Taylor Back to all interpretations 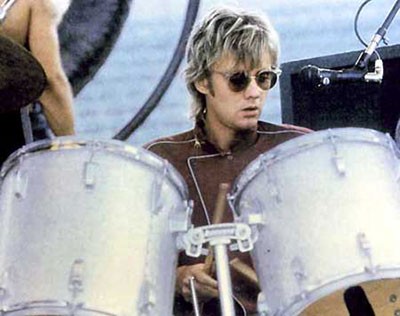 Roger Meddows Taylor was born on July 26, 1949, in Norfolk, UK. His first instrument was not drums, but, surprisingly, ukulele. He played it already at the age of 7, when he founded The Bubblingover Boys band with his friends. At the age of 8, Roger moved to Trura, where he joined his first real band, Johnny Quale and The Reaction. He moved again in 1967, this time to London, where he studied dentistry at the university. Already after one year he, together with Tim Staffell and Brian Maya, founded the band Smile, from which in about two years Queen appeared. After Tim left, Freddie Mercury and later also the bassist John Deacon joined the band. And so the Queen era could begin.

The thing that really fascinates me about Roger is the fact that he is self-taught. Learning how to play different instruments by oneself without any mentorship is certainly not an easy task (I know this from my own experience), let alone mastering as many instruments as Roger does (guitar, keyboards, bass). Of course, his primary and dominant instrument is drums. If I were to evaluate Roger's playing style, I would describe it in one word: particular. Perhaps Roger's style cannot be fully explained in words, it is essential to hear it. One of the peculiarities of his playing technique, which can be noticed at first glance, is the fact that he holds the stick in his left hand the opposite way. The result is a more tumultuous hit. Another Roger's typical trait is his hi-hat playing manner, when he leaves the hi-hat slightly open on the second and fourth beats. As a result, he gets a very distinctive specific reverberation that is absolutely unique in combination with the sound of the snare drum. Taylor's playing style has never been based on the strength of hit, which many well-known colleagues of his in the field establish their approach on, yet his playing always creates a fresh and energetic impression. However, the most remarkable feature of Roger's playing is the variety based on the use of non-traditional techniques, as well as on specific instruments and equipment, which, of course, he changed over the years – examples include gong, electronic drums in the 1980s, or rototoms which he’s used throughout almost his entire career.

Roger Taylor is undoubtedly a remarkable musician, both from the point of view of playing musical instruments and when in comes to singing. During the entire career he was not only a great support for Freddie as a singer of accompanying vocals, but later also a singer in his solo band The Cross. At Queen‘s concerts he tirelessly sang often very high-pitched second voices, which were often laid over the main vocal of Freddie! In some of the concert recordings we can even hear Roger's singing suddenly intensified (and Freddie's singing slightly withdrawn), with Roger taking over the main vocal line instead of Mercury. This happened in the moments when, for example, at the end of the concert Freddie was tired and did not feel like daring some high tunes. In such moments, Roger took over these high tunes with his very characteristic „hoarseness“.

But going back to the drums as an instrument itself. At the beginning of his career, Roger used the Premier drums, from which he switched to the Ludwig brand. From then on, he has used this brand throughout his virtually whole career in Queen. As Roger once said, „The Ludwig brand in the drumming world is like the RollsRoyce in the automotive industry“. If I had to go into more detail, it is specifically the Ludwig Classic Maple series, which is the top line of this brand, that Roger has endeared. As the name suggests, it's a maple drum set that has provided the right sound for the band for years. Of course, live performances and studio work are different in many regards, so, for example, when recording the album Made in Heaven, Roger gave preference to the DW (Drum Workshop) label, on which he recorded this album and which he used during the tour in 2008. However, talking of the Ludwig brand, Roger has used mostly large-size drums, which is, we can state, quite normal for this style of music. Above all, when we realize that his career grew in the 1970s when this was nothing unusual. In any case, this preference stayed with him also in the years to come, and practically until today. Even though we could find one more exception. No one knows exactly how it really was, but if we focus on the drums on the most famous Queen‘s tour, the Magic Tour, we will notice that he used Yamaha drums, and those are in classic proportions. Those were birch drums, and Roger was probably not very happy with them because he left this type right after the tour.

Roger returned to the big world stages with Brian May in 2005, when under the title Queen + Paul Rodgers they, along with the legendary former singer of the Free and Bad Company band, brought back memories of the past and also put together the new studio album, The Cosmos Rocks, in the creation of which Roger was largely involved. His compositions are among the top tracks of the album (like the song Surf's Up… School‘s Out!), and after finishing the several-year collaboration with Paul Rodgers at the end of 2008, Roger remains the only musician from the former Queen members who still actively makes music (last year's Unblinking Eye single might be a hint of a solo album coming)…

Roger Taylor was (and still is) the driving force of Queen. Not only his marvellous accurate playing manner, but also his creative ideas, unmistakable voice and the energy he brought to the band speak for themselves.

He was one of my very first inspiring drumming examples and right from the beginning I tried to learn all the songs of the band. Taylor's style has been imaginative right from the first albums and it is different from those of most of the drummers of the 1970s and 1980s. Percussion lines are purposefully created so as to always complement the other bandmates' ideas. Taylor often uses the swirl technique or the unmistakable sound of an open high-hat along with the snare. This makes him different from all other drummers of his time.

Among the striking „pranks“ of his playing style, we can mention also the very frequently hit cymbals or sixtuplets between the floor toms and the kick drum. Playing Queen without these characteristic elements is virtually impossible, as these are the most distinctive attributes of his style.

Another thing I admire about Roger, which is also a very significant part of his playing manner, is the sound of the set. Drums with a deep sound have appealed to me from the very start. Based on this I also chose the kit which I play in the band: Maple Sonor 3007 with deeper bodies and Ascent kick drum, size 22×20. A lot also depends on the tuning and especially on the membranes you use. I like the two-layer Evans EC2 with a ring that cuts the high tones and this way adds bass. I use a similar effect on the kick drum as well. On all the drums, I have all of them very loose, just like Roger, so I can only play them with the wrist technique.

If I were to specifically approach the high technical maturity of Taylor's playing, I would choose the song called Dead on Two Legs, where he plays a rhythm which was very progressive for 1979. Then definitely also the Bicycle race, Mustapha, Innuendo, and others. Summarizing Roger's entire career would take more than one book. For me personally, he is one of the most inspirational and indispensable icons of rock music.