Fans of one of the greatest music bands of all the time, Queen, can look forward to a big event. On May 15, 2020, the concert show named Queen Relived will take place at O2 Arena in Prague, commemorating the glory of the band that changed the course of rock music history. Popular hits of the British icon will be played by the Czech band Queenie, which is considered one of the best tribute bands in the world. The music experience will be supported by an impressive light and multimedia show. Concert tickets will become available in the coming days.

The whole concert show will be a celebration and a commemoration of the famous band. “With this concert, we want to create an atmosphere which the audience would experience at a real concert with Freddie Mercury. We decided to create a stage worthy of concerts of the world's biggest bands,” says Martin Zoubek on behalf of the organizing agency.

Famous songs, which are still aired by radio stations worldwide, will be played by the Czech band Queenie. It is one of the most successful and recognized tribute groups ever. They play the songs of Queen in authentic arrangements and costumes, and play them like no one else. The band Queenie was formed thirteen years ago and since then has had over 1 200 concerts, one fourth of them abroad, including several tours e.g. in Scandinavia or Belgium, a show in Vietnam, a performance at the famous Montreux Jazz Festival, where Queen played in the Eighties, and concerts at the birthday celebration of the British Queen Elizabeth II or of Dominik Hašek.

“We have state-of-the-art equipment, lights and large screens. It will be the biggest concert ever performed in our „tribute“ genre. We have involved the show and stage designer Martin Hruška, who is a worldwide recognized professional and who in the past worked for the biggest stars, including Madonna,” says Michael Kluch, frontman of the band, whose portrayal of Freddie Mercury can give the goosebumps to the audience.

The show has big ambitions. In the future, the band plans to go on a European and world tour with it to further spread the legacy of the legendary Queen. With a bombastic stage design and songs in their original arrangements and tunes – which is nearly impossible, considering Mercury's phe­nomenal vocal range – this is a plan that must work out.

Hruška's ambitious scene design for the upcoming Queen Relived show features not only a giant stage but also a „bridge“ in the form of two long arrows stretching through the entire hall. Thanks to that, the audience will have the musicians practically within arm‘s reach. The lighting design of the concert will make use of the latest technologies and methods. 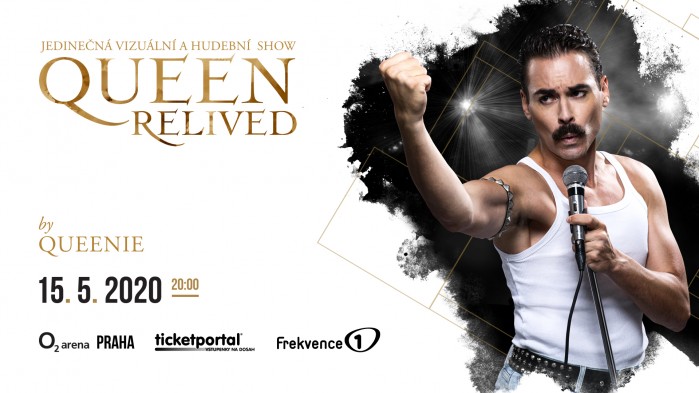