We have brewed the beer "by Queenie"

It had never occurred to us that one day we would present this drink, which has a particularly rich tradition in our latitudes, under our own brand.

The idea of brewing Queenie beer was born back in 2016 in the mind of the owner of the Panaczech brewery, Mr. Ondřej Vrkoč, when he attended the band's concert at the Krkonoše Beer Festival in Vrchlabí.

„How about we take our and English malts, hops and yeasts, choose the best of what both our countries offer and create a perfect symbiosis for a unique taste experience?“

Oh, good old England. We have been looking at its distant shores for centuries, and yet we hardly realize how much we actually have in common. We laugh at quite similar things, we make fun of religion, we are close in our music tastes and culture in general, and especially: both our nations are, quite unsurprisingly, considered beer-loving nations. Could that perhaps be an example of the imaginary communicating vessels?

The idea of uniting what makes our beer good with what our fellow beer enthusiasts on the other side of the channel enjoy has matured over several years. During this time, the vision of the recipe has been becoming increasingly clear. The core part, based on the English types of beer, would be enriched with the Czech tradition of beer brewing and the heart of the music itself, to make it feel as if the legendary rhythms which pulsated across the world stadiums were bubbling on the tongue.

Based on discussions with the band, the head brewmaster of the Panaczech brewery, Mr. David Nedoma, created the recipe for Queenie beer, which includes factors from both England and the Czech Republic so as to perfectly capture, figuratively saying, the flavour scene of the English legend's music as performed by our Czech band.

The result thereof is our ten-degree beer with Pilsner yeast, Žatec hops, English malts and a royal golden color.

Now also available at our E-Shop. 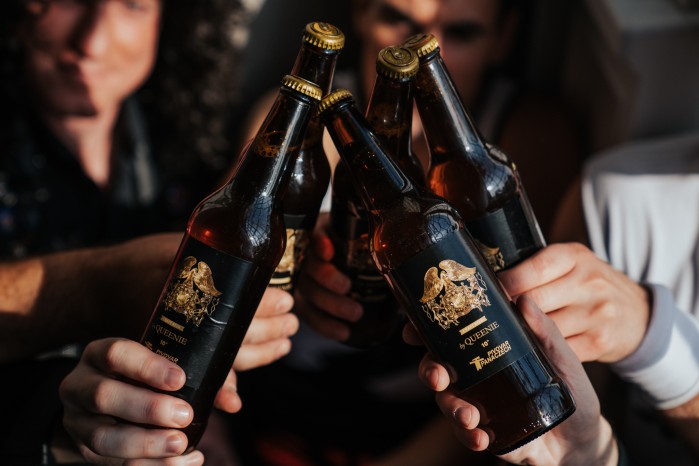