The fans of the Queenie music band with frontman Michael Kluch are about to enjoy a surprise –a spectacular online concert on Friday, 9 April 2021, 7 p.m. The band will utilize a unique visual stage set, including shots from a bird’s eye view. They promise a show unparalleled in the entire Czech online environment.Queenie have chosen a rather fitting name for this occasion: The Show Must Go Home; a slightly altered version of the name of the song The Show Must Go On written by Freddie Mercury and Queen. It is this legendary British band that Queenie pays tribute to with their concert shows and whose music they share with younger generations.

The online show is being prepared in reaction to the inquiries of fans missing live culture. „We have been living under strict restrictions for an entire year, and the end is still nowhere in sight. It is not only our favourite meeting places that are getting covered in dust, but also our souls. This is why we have heard the pleas of our fans and would thus like to add a spark of colour to their current grey daily routines,“ says Queenie frontman Michael Kluch about the circumstances of the online concert, and he adds: „The show must go on. And we want to make something very clear –life goes on, too! We still have a lot to look forward to, to live for. This is how we see it, anyway. We would like to support those who have given into sadness and exhaustion.“ At the same time, Queenie are very much aware of the non-transferability of a live concert and the atmosphere of small clubs as well as big arenas into a home environment. For this reason, the band has decided to approach the show differently and to offer their fans an experience they are not likely to get at a normal live concert.

On Stage and Backstage
It is not Queenie’s intention to hold a common musical stream consisting of a playlist only. TheShow Must Go Home offers an original approach to online concert-making that will transfer the spectator directly onto the stage. „We have decided to build a part of our stage from our future Queen Relived show for one evening and to create an online show with a spectacular visual stage set,“ says Michael Kluch, and he continues: "Those of you who had purchased a ticket to one of the O2 Arena concerts, fear not! This concert is going to be quite different. We are about to experience a different playlist, different costumes, different surprises. We are simply going to make use of a part of our stage in order to perform our vision of a 21st-century concert experience –albeit in an online form.”

The online environment may not provide the spectators with a live concert atmosphere; it will, nevertheless, allow them to imagine themselves on the stage as if during a live concert, and to enjoy Queenie as if the band played in their homes. In order to achieve this impression, we employ twelve cameras shooting the stage and the band members from all angles, as well as from a bird’s eye view. Apart from Queen’sfamous songs performed in original arrangements and keys, the spectators will also enjoy a tour of the backstage that is commonly unavailable to the public. They will get a unique chance to take a peek at the preparations for the show. They will be able to view the entire stage and its construction process. They will get to know the crew who handle everything, and observe sound and lighting technicians during their work. And, of course, they will be allowed to take a sneak peek at the band’s changin­g room.

„The Show Must Go Home will be unique in all aspects. I would venture to say that in the Czech online environment, a similar show is a completely unprecedented occurrence. The stage on which we will play is larger than normal live concerts. Despite the fact that it isan online streaming event, we want to be completely authentic and perfect to a tee –as if it were a live concert. As usual, no detail is too small, we try to exceed the already high standards,“ says Michael Kluch on the promised extraordinary experience.

Experience it all without the need to leave the comfort and safety of your home.
Put simply: The Show Must Go Home! 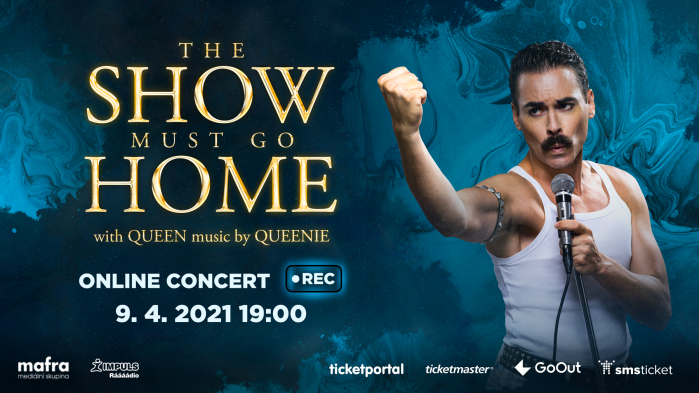